We love it when you talk about us.

Operating out of a typical

Everywhere your junk is LoadUp offers Free Christmas Tree Haul Away for the Holidays

“LoadUp is helping customers responsibly get rid of Christmas trees this holiday season.” “The tech-enabled junk removal company ranks sixth in Georgia with revenue growth of 2,929%”

ATLANTA, April 24, 2018 /PRNewswire/ — Local junk removal company LoadUp has announced they have diverted a staggering 2.5 million pounds from landfills and into recycling programs. Having experienced amazing growth in less than two years, LoadUp now services over one hundred and sixty cities and has hired two hundred and fifty driver teams. Ten independent contractor teams operate in the Atlanta region along with ten full-time employees.

Marietta native Greg Workmon launched the company after a very negative experience with a “Big Junk” business. A lifelong resident of the region, Workmon was driven to create a better junk removal experience so that others wouldn’t have to deal with the inaccurate pricing schemes so often utilized by the Big Junk industry.

“LoadUp began with me picking up mattresses in my truck. But in just two years, we have expanded to a multi-million-dollar business,” Workmon explained.

Workmon was born with Cystic Fibrosis, a genetic disorder that affects the lungs and digestive system. He feels that the rapid success and impact of LoadUp shows that almost anything is possible with the right focus, attitude and work. Having started LoadUp from scratch and built it into a successful national business, Workmon hopes to show others that dreams can be made into reality.

“The average life expectancy of someone with Cystic Fibrosis is about 37,” said Workmon. “I’m in great health and consider it my duty to give back to the community and my wife Lindsey and my 1-year old son Rhett in every way possible. I can’t imagine living anywhere other than Atlanta. I’m proud we have been able to create jobs in the region, offer customers a better service at a lower price and help the local environment.”

Customers receive an upfront rate over the phone or online. In this way, customers know exactly what to expect before the onsite visit occurs. By using a proprietary software system, LoadUp manages drivers in an effective and efficient manner and prices that are typically 20-30% less than other fully licensed and insured junk removal companies.

LoadUp deploys a large network of independently licensed and insured junk hauling professionals. Customers receive honest and transparent pricing upfront and a 20-30% lower cost than a standard junk removal company with no compromise in quality or insurance coverage. Learn more at goloadup.com.

“LoadUp announced today that their company has achieved a coverage milestone of 160+ cities.”

ATLANTA, Feb. 7, 2018 /PRNewswire/ — LoadUp announced today that their company has achieved a coverage milestone with over 160 cities across the U.S. covered by 250+ driver teams. Since its launch in 2016, LoadUp has served over 30,000 highly satisfied customers and diverted in excess of 2.5 million pounds from landfills.

The quick rise and success of LoadUp is due to the company’s industry disrupting approach. It is the only junk removal service that features upfront, guaranteed pricing before arriving on site. This is in contrast to the common tactics taken by Big Junk franchises.

Workmon explained, “I responded to a radio commercial, which promised a good deal and a streamlined process. Yet, I received neither. The entire process was a big investment in time, and the driver employed high pressure negotiating tactics. In the end, I felt taken advantage of and instantly realized that there absolutely had to be a much better way.”

The standard business model of Big Junk franchises is to provide customers with free on-site estimates, only to increase those estimates once on-site. They claim that they simply cannot provide you with an accurate estimate over the phone. Then, once teams arrive, guilt tactics are used to pressure customers into paying a much higher price than originally quoted.

LoadUp takes the exact opposite approach, giving the best rate upfront over the phone or online. Customers know what prices to expect before the onsite visit occurs.

Utilizing a proprietary software, LoadUp manages all driver teams efficiently and provides an Uber-like level of service. All drivers are trained and have undergone full background checks. LoadUp provides a high level of flexibility, removing large and bulky items.

LoadUp’s rapid growth, in part, has been a reflection of its commitment to a price guarantee, which is typically 20-30% less than any other fully licensed and insured junk removal company. Customers know what they are paying before a LoadUp team arrives.

LoadUp customers book online, schedule pick-up times, and can even track their appointments and provide reviews when done.

LoadUp deploys a large network of independently licensed and insured junk hauling professionals. Customers receive honest and transparent pricing upfront and a 20-30% lower cost than a standard junk removal company with no compromise in quality or insurance coverage. Learn more at goloadup.com.

ATLANTA, August 29, 2017 /ReleaseWire/ — Junk removal is an age-old problem that has plagued households for centuries. When it comes time to get rid of old furniture, large objects, appliances and just general household junk, many people don’t know where to turn and it ends up sitting around as an eye sore. LoadUp was founded to solve this issue once and for all. LoadUp is a new, on-demand junk removal service that makes it easier than ever to get rid of unwanted items. The service is quickly growing in popularity as word spreads about its benefits.

LoadUp is easy to use. Users simply schedule a pickup and specify the number of items that need to be removed and then a LoadUp team will show up to take the items away in a safe and responsible manner. Upon placing a pickup order, customers will receive a text message with a link to track their driver once they started the job. Gone are the days of waiting around all day within a 6-hour time block for pickup without any idea of the driver’s whereabouts. LoadUp is focused on giving users a convenient and hassle free experience. After the pickup, users can rate their driver team. This user-based rating system ensures that providers are up to LoadUp’s standard.

All LoadUp team members have undergone a background check, to prevent any safety or security problems. Driving teams are 100% licensed and insured. Additionally, LoadUp backs every team with a multi-million dollar insurance policy, just in case anything goes wrong. Pricing is up front and typically 20% less than other insured junk removal companies on the market.

LoadUp offers junk removal services in cities all across the United States and it is still rapidly expanding to new locations. Available areas can be found at https://goloadup.com/cities/.

According to Greg Workmon, founder of LoadUp, “A few years ago I saw a major issue with getting honest and upfront pricing from traditional junk removal companies. Most won’t give you a price until they come on site. Once that happens, they’ve got you from a pricing standpoint. At LoadUp we offer the same, safe and convenient junk pick up service all for an affordable upfront price. LoadUp currently operates in over 60 markets in the U.S. and we’re planning to be in over 100 U.S. markets by January 2018.”

“We’re proud to be known as the Uber of junk removal with on-demand hauling.”

Consider LoadUp the Uber of junk removal services. Whenever someone needs junk removed from their home, from old mattresses to yard debris, simply hop online and book services with LoadUp. It’s as easy as 1, 2, 3!

Schedule pickup at goloadup.com
Removal services are assigned to a team in the area
Upon job completion, an email is sent for review

LoadUp is a new business concept that makes professional junk removal easy. An individual in need of junk removal services goes online and fills out a form specifying their needs. LoadUp provides upfront pricing for the specific services that are requested. Just like Uber, LoadUp manages the payment of the contractors that are dispatched in the requested area. Pricing also is typically 20 percent cheaper than working with independent junk removal services.

It’s common to be concerned about who an individual is hiring to provide services at their home, but LoadUp has this covered under the new business model. Along with providing standardized and affordable pricing, LoadUp also verifies all professional teams that participate under the LoadUp name. Each LoadUp team has full background checks and is fully trained in order to protect personal property. In addition, all LoadUp teams are fully insured with a minimum one million dollar policy.

LoadUp Technologies is a new, on-demand junk removal business based out of Atlanta, GA. LoadUp deploys a large network of independently licensed and insured junk hauling professionals. LoadUp brings you honest and transparent pricing upfront for junk removal, and cost 15 to 20 percent less than a standard junk removal company with no compromise in quality or insurance coverage. For the first time, we held a week long LoadUp… In the year 2020, nothing is ever predictable. Starting with… 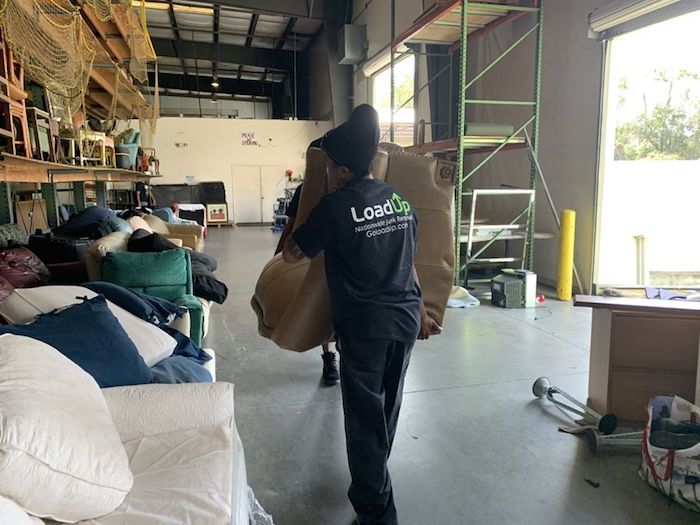 As we transition back into the world after 2020, we’ve… 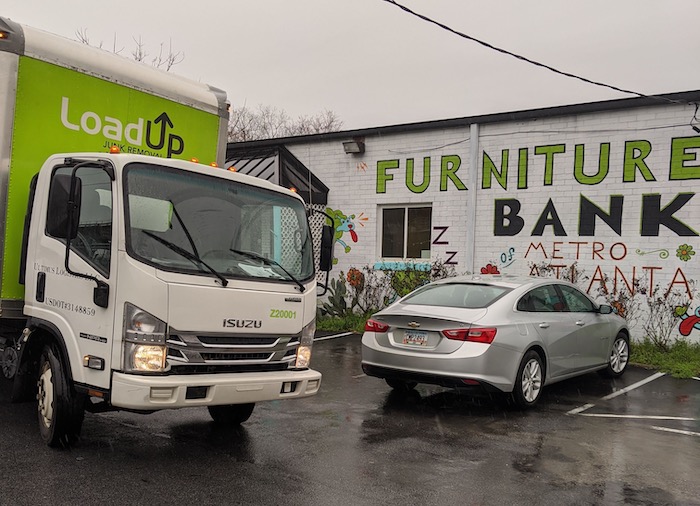 For the last 10 years, the homeless population has steadily…

Working on a LoadUp story?

We love publicity and enjoy working with journalists to share compelling, unique stories about LoadUp. If you’re a member of the media, let’s talk! You can get in touch with us via email: tluther@goloadup.com.

Note that only media inquiries to this email address will receive a response. If you have a customer service question, please visit: goloadup.com/contact.