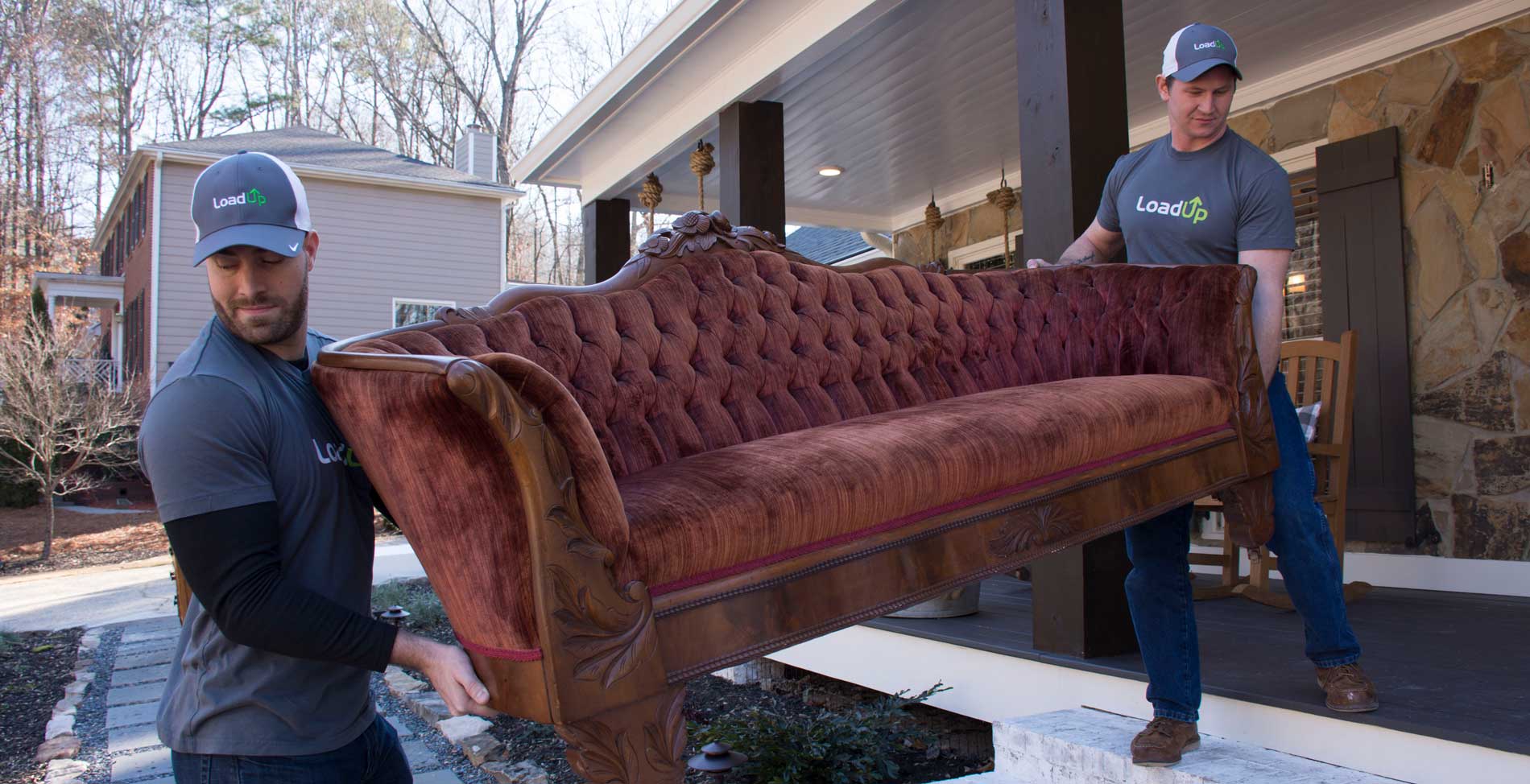 Junk removal may not sound like the most exciting industry, but it’s a much-needed service for thousands of people across the US which makes it potentially a very profitable business for those willing to get their hands dirty (pun intended).

Unfortunately, there’s a dark underbelly to the junk removal industry and many business owners are all too willing to get their hands dirty in a less-than-ethical way, instead of just putting in the hard work, in order to be profitable.

Sit back and grab that tea and that popcorn, because I’m about to share the dirty secrets of the junk removal business with you and tell you about one junk removal company that’s shaking things up by challenging the traditional model of junk hauling.

If you’ve ever used a junk removal company before, you probably already know all about how the junk removal process goes.

You call them to get a quote, they insist they have to send someone out to give you an estimate, you wait around for them to show up, they take a look at the stuff you want to have hauled away, give you a ridiculous number, you haggle back and forth about the price until you agree on a number.

When the day finally comes for them to pick up your junk, they take their time getting to you. When they finally arrive and get everything loaded onto the truck, they try to up-sell you by getting you to add more stuff.

Finally, you get the bill and are surprised to find it’s full of hidden fees and surcharges, making disposing of your old sofa or outdated fridge much more expensive than you were expecting. Maybe you fight it a little, but you eventually swallow your shock and get out your wallet and pay the hauler right there.

Unfortunately, thousands of people across the country, day after day, year after year have had the same experience. The story this person left in an online forum says it all: “Never again” indeed. Thankfully, there’s a new junk removal company on the scene that was started in order to shake up the status quo in junk removal.

LoadUp was founded specifically to be an easy, affordable, and honest junk removal service.

Big Junk franchise junk removal companies advertise that they offer “free on-site estimates.” Though this might sound great at first, it’s really just a marketing gimmick that allows them to quote low so you book their service, then bill high when they arrive to haul everything away.

I once spoke to someone who told me about her firsthand experience with junk removal quotes from one of these franchises. She told me that she only had a queen mattress to get rid of, but she just didn’t have the time to get rid of it herself because she worked full time and had a big family to take care of.

She called this junk removal company to get a quick quote for her mattress, but they told her they couldn’t do that without sending someone out to give an on-site estimate. For a mattress. Ridiculous, right?

Because she was at work, she couldn’t just leave and go home to meet the guy so because the mattress was already in her open garage, she told them just to go over and take a look.

Have bulk items but want a price now? GET YOUR PRICE ❯

Save on Traditional Junk Removal Minimums

The customer service rep told her they couldn’t do that because she had to be on the premises. So, she rushes home during her lunch break to meet the hauler.

When he finally arrived hours later, he hemmed and hawed over how she should go ahead and add on all the other stuff she maybe wanted to throw away so she wouldn’t have to deal with it later.

She told him she didn’t have anything else she wanted to dispose of and just wanted to know how much it would cost for the mattress.

The hauler finally told her due to minimums, he needed $300 to haul the mattress away! Of course, she wasn’t going to pay that much for just a mattress! So, she declined the service and hurried back to work, having already wasted half of her day and no closer to getting that old mattress out of her house.

Unfortunately, this woman’s experience with junk removal is all too common. The “free on-site estimate” is used by traditional junk removal companies to draw you in, get you to add more stuff on, then shake you down for way more than they quoted you in the first place once your junk is loaded onto the truck.

That’s why LoadUp has cut out the on-site estimate, providing an honest, clear price upfront so you don’t have to waste your time and you know exactly what you’ll pay. The best part is that the price is a fair and affordable one.

Get The Modern Junk Removal Alternative

LoadUp CEO Greg Workmon started the company after he had a bad experience with a “Big Junk Franchise” junk removal company.

Workmon wanted to create a company that provided a much better junk removal experience for others so they would no longer be victim to the Big Junk industry’s deceptive pricing schemes and sales tactics.

While other junk removal companies charge by volume in an effort to get away with charging you more. The modern alternative that LoadUp offers are rates based on item count instead to provide junk hauling for less. This pricing structure is much faster, fairer and way less expensive for the customer.

“I left my heavy full-size box spring outside of my apartment. LoadUp picked it up on time and I received a text when it was picked up. I used the $5 coupon for signing up with my email. This was cheaper than “College Hunks Hauling Junk” which charges per space used on truck and would’ve been $115 for a full-size box spring. Very pleased with my choice!” -Natalie Nevarez

What makes LoadUp different is that customers receive an upfront price over the phone or on the company’s website so they know exactly what to expect before the Loader crew arrives.

LoadUp also uses a custom junk removal software system to manage loader teams in an effective and efficient way while offering prices that are, on average, 20-30% less than other professional junk removal companies that are licensed and insured. Here’s what one customer had to say about their experience with LoadUp:

“After booking two failed attempts for removal on Takl (one never showed up and the other refused to send a second person as required), I was very happy with the services from GoLoadUp. It was less expensive, the communication was clear, and confirmation email and phone call great. The guys showed up on time and sent a message prior to arrival with the estimated time. From the time I answered the door it took less than 10 minutes for them to remove the couch and carry it down a flight and a half of stairs to the truck. They were professional and careful of the doors and flooring. I highly recommend the service and will definitely use LoadUp again.” -Michael Dolak

Because the service is paid for securely with a credit or debit card when scheduling your pickup, there’s no haggling, hidden fees, and surcharges, or having to be onsite with cash on hand when you book junk removal service with LoadUp.

This all works together to make LoadUp truly the “junk removal of the future.” Think about the way technology is advancing in the transportation industry with rideshare.

You probably wouldn’t call and order a yellow taxi anymore, would you? If you needed a ride somewhere, you would go straight to Uber or Lyft. Right? 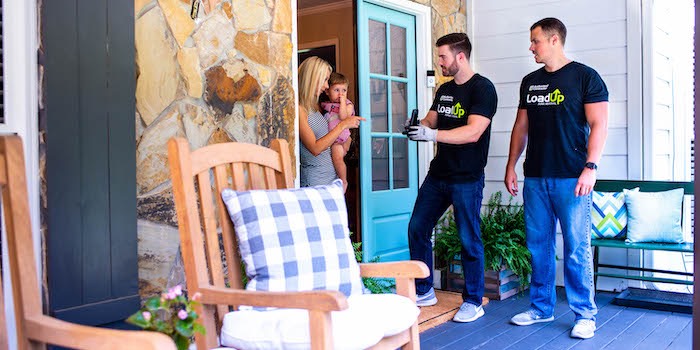 Well, that’s basically how LoadUp works. Many of our customers have even called us “the Uber of junk removal” because of how it easy it was to book and use our service.

Why continue to use the big yellow taxi of junk removal when you can make junk removal as streamlined as a Lyft or Uber with LoadUp? In. Out. Gone. So you can move on.